Full
€6.50
Reduct
€5.50
Reduct
Reduct
Rate RESERVED ONLY to holders of tickets for the Campania Festival shows.
Relevant documentation will be requested upon entry.
Select

Ticket that includes the visit of Villa Campolieto located along the Golden Mile, in the municipality of Herculaneum.

It was 1738 when Charles of Bourbon and Mariamalia of Saxony, his wife, chose Portici to build a new palace and to begin excavations in the Roman city of Herculaneum. The luxuriant flowery forest on the lava river, the gulf enclosed by the islands of Capri, Ischia, and Procida, the mass of the volcano in continuous activity and the Roman ruins that were unearthed, already singularly attractive without competitors, merged into an unrepeatable whole. From that moment all the Neapolitan nobles followed the Bourbon court and raised one or more villas for the summer in the coastal area at the foot of Vesuvius, creating an architectural complex that is unique in the world for quantity and beauty: the 122 Vesuvian Villas, a dialogue between nature and artifice, sea and volcano, rococo and neoclassicism. In the area between the borders of the municipality of Herculaneum, the concentration of the Vesuvian Villas is dense and of particular prestige due to the importance, in the economy of the Kingdom of Naples, of the clients, so much so that the stretch of road that sees them in succession is called the Golden Mile: buildings built by architects such as Luigi Vanvitelli, Ferdinando Fuga, Ferdinando San felice, Domenico Antonio Vaccaro, completed by vast gardens that lapped the coast and pictorial decorations made by great artists. The perspective escapes of the colonnades, the allegorical figures and the portraits of the surrounding environment were painted with the intention of experiencing contact with nature even while staying inside the buildings.Ancient microcosms dedicated to pleasure, essential stages of the Grand Tour from which you could simultaneously enjoy the view of the sea and that of the volcano which, after several decades of abandonment, careful and rigorous restorations have returned to life, now become a unique and exceptional setting, for cultural events of all kinds where history and pleasure are the air you breathe. 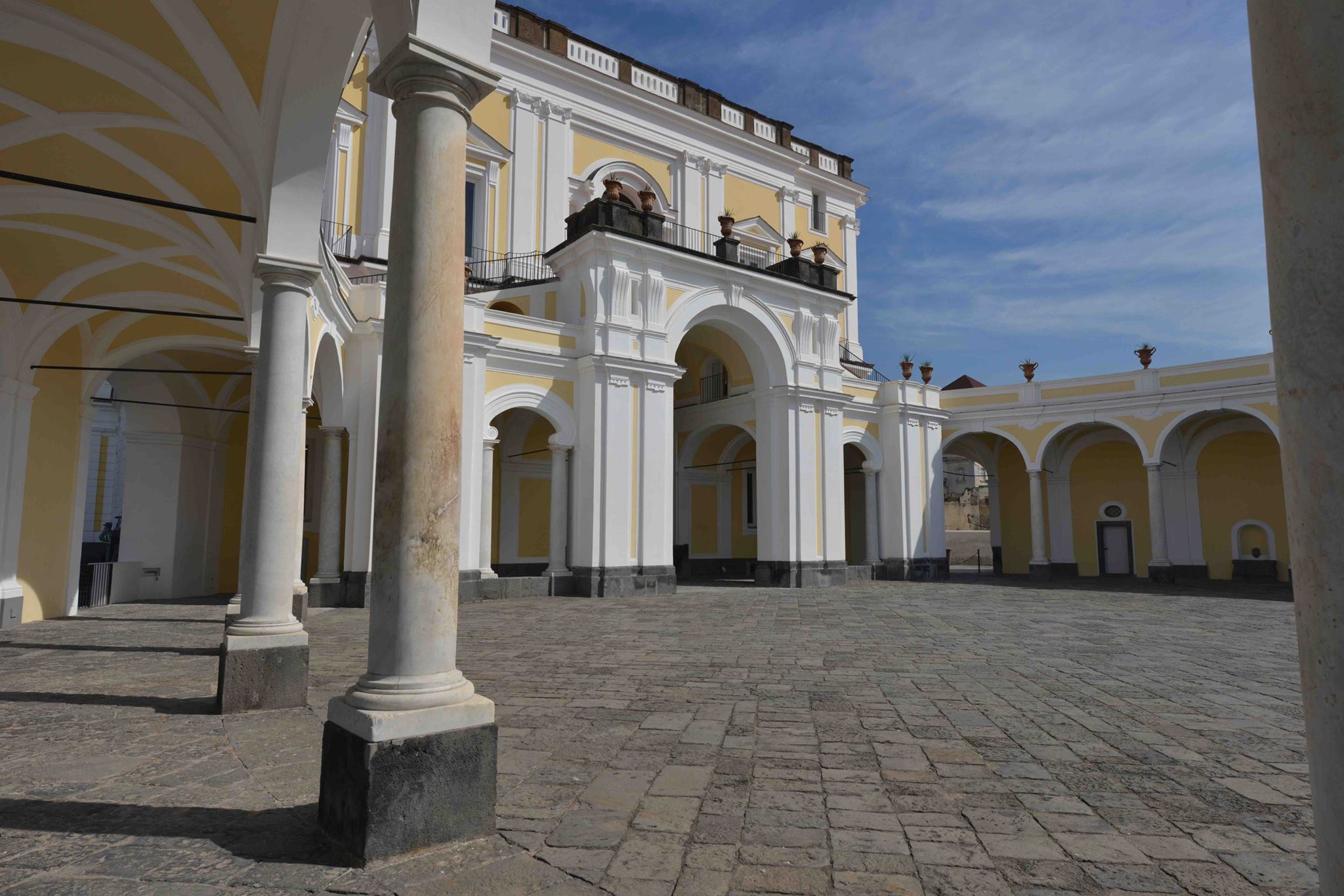 Built in one of the happiest and most evocative positions, downstream of the Bourbon road of Calabrie, not far from the Royal Palace of Portici and contiguous to the Villa Favorita, Villa Campolieto was built by the will of Prince Luzio De Sangro, Duke of Casacalenda who in 1755, he entrusted the design and execution of the works to Mario Gioffredo.

Forced to abandon the work around 1760, he was replaced by Luigi Vanvitelli who, from 1763 to 1773 (the year of his death) directed the works, completed in 1775 by his son Carlo. The Villa Campolieto, acquired in 1977 by the Body for the Vesuvian Villas, today a Foundation, after 6 years of restoration has been restored to its original splendor and returned to public use. The building has a square plan, articulating the four blocks of a central Greek cross gallery, and is spread over five levels. The rear facade of the Villa opens with an elliptical portico with Tuscan columns that forms a covered belvedere and ends with a magnificent view of the sea with a tub and an elliptical staircase that connects the building to the garden below. On the left, the imposing stable designed by Gioffredo, with cross vaults and piperno pillars. Vanvitelli "upsetting the original design of Gioffredo" completely redesigns the staircase of the Villa, creating a central rampant and two lateral ones on the model tested in Caserta, enriching it with a mask and a grotesque located on the inner side of the entrance arch and six niches that mark the ascent to the noble floor containing statues with a mythological subject, the vestibule then presents itself with a domed atrium flanked by two apsidal niches. Its function was to welcome and direct guests to the different rooms of the apartment. From the room called "Cannocchiale" for its characteristic conformation, one enters the private rooms of the family, then arriving in the dining room, certainly one of the most evocative rooms of the villa, designed by Gioffredo in a square shape with a barrel ceiling, it was overturned by the Vanvitelli who, following the wishes of the landlord, made it circular with a so-called “Incannucciata” technique, which consists of a wooden rib, superimposed with bamboo canes, plastered and then frescoed. 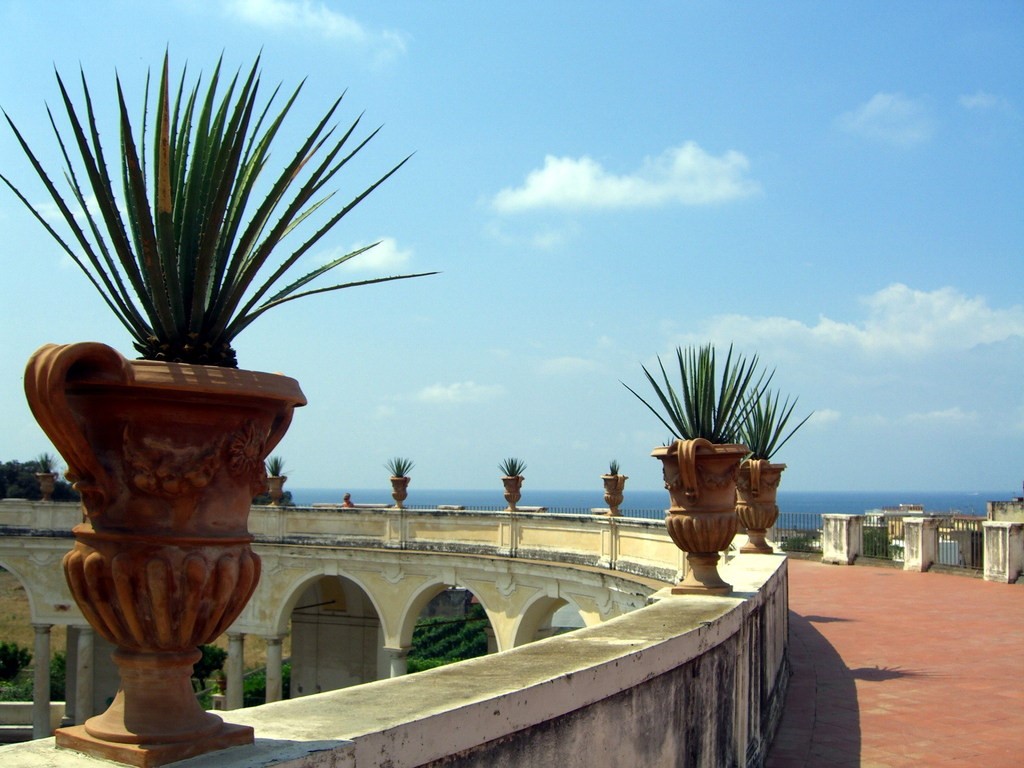 The fresco, which decorates the entire room, by Fischetti and Magrì, reproduces the supporting structure depicting a gazebo covered with a vine grown in the prince's grounds and where the family loved to laze with guests on beautiful summer days. With our backs to the window, observing the fresco from right to left, we first meet a group of people playing cards including De Sangro, followed by the islands of the gulf in the background, and after passing the door we can see one of the few self-portraits on a fresco by Vanvitelli who scrutinizes the sky with a monocle. The service doors blend in with the fresco, part of which has been lost along with one of the four seasons depicted in the corners of the room. The "Hall of Mirrors", located in this wing of the building, was a female study, as can be deduced from the soft colors, in which we entertained and conversed before entering the party hall. Even if the construction of the Vesuvian villas of the XVIII century was conceived in such a way as to favor the external use to the internal one, great importance was given to the Salone delle Feste. In what remains of the barrel ceiling fresco, mythological figures with festoons, cupids and load-bearing architectures can be glimpsed. The frescoes on the walls reproduce the myth of Hercules with eight medallions depicting his life, two niches with the statues of Hercules and Cupid, while in the lunettes above the doors Abundance and Wisdom are depicted. Going out on the terrace you can admire one of the most evocative and panoramic views of the Gulf of Naples, from Posillipo to Ischia, to reach Capri and the Sorrento Peninsula. On the two sides of the gallery, two staircases branch off leading to the uncovered walkway of the portico, heading to the right you can see four sentry boxes that bordered a fish pond and which served as shelter from the sun while fishing. In the background, the gaze opens towards the woods of the Royal Palace of Portici and the Herculaneum archaeological area. Looking out at the center of the promenade, we admire the architecture designed by the elliptical staircase that leads to the fountain and the palm grove. Continuing the walk and turning our backs to the sea, we admire the Vesuvius that dominates the landscape with its grandeur, on the same perspective Villa Ruggiero, on the right Villa Favorita. 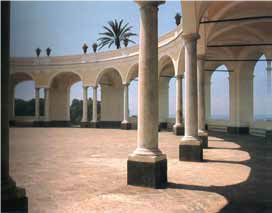 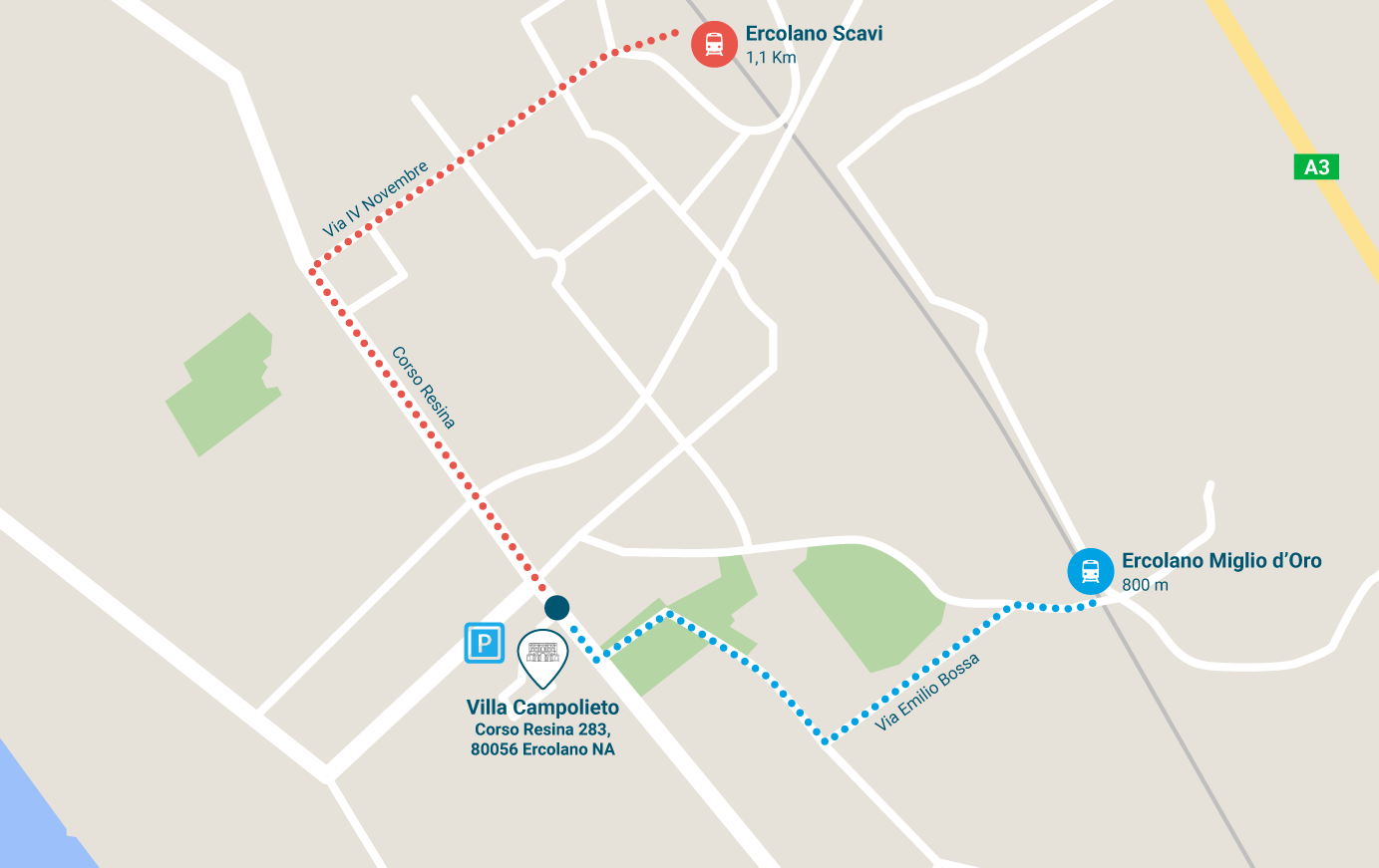